Victor Batrachian (born April 8, 1961): Born to a wealthy banker in Geneva, Switzerland, Victor is the leader of "The Five", known as "The Lizard King". Victor was quite a brilliant student and, by the end of his education, held a Ph. D. in forensic psychiatry. He was also a licensed general practitioner. This is when he began murdering his elderly female patients after convincing them to leave him large sums of money in their wills. As the heat rose in Europe, Victor used forged documents to attain a Green Card and emigrate to the US. Again, he began his killings, taunting the authorities with letters signed "The Lizard King", but was eventually captured, tried, and convicted for his crimes in the US. By the time the events of the game begin, he's awaiting punishment on death row in Gardelle County Jail, Texas. It's implied through the in-game documentation, along with the events that permeate his level, that he has the power to kill by exploding the heads of his victims, and then bringing their corpses back to life, but an explanation is never given. Victor is another of the game's boss characters.

Batrachian's victims were all young men found with exploded heads and the "lizard king" symbol burned into their chests above the heart. They were also found clutching a poem in their hands which read:

The Lizard King shall lead The Five,

From out of the Southern gaol shall cut HIS bloody swathe,

In HIM the darkness stands revealed,

HIS eyes are void as a dead man's gaze,

As cold as the light of a dying star. 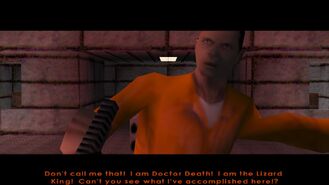 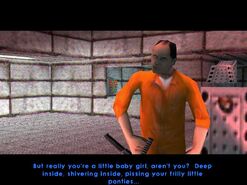 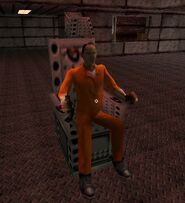 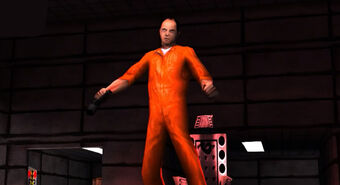