"And into Asylum- like a great black engine roaring to eternity, ravaging the already benighted landscape with its savage malevolent presence. And within, the legions of the truly damned. Insanity sheer and stark and once in human form, now gutted and torn by eons of glutted indulgence. Their bloodlust flecking the oily walls. Living in the shriek's of victims ensnared, hanged, drawn and quartered by the serpent's squalid writhing's. This is the place I have not wanted to dream of, and the dream is now the place I partly live through."

(Note: This article is for the Asylum in general, but there are several different levels in the game with the prefix 'Asylum' followed by the rest of the title.)

The Asylum is a titanic building, which serves as a sanctuary for "misunderstood individuals". The Asylum shouldn't be confused with Deadside itself, because Deadside is a natural place where people go when they die, while Legion had the Asylum built in the center of it, so his grand army could finally be constructed. The Asylum was designed by the 1888 killer, Jack the Ripper. It's a massive, black, coliseum-like structure filled with evil and indescribable horrors. 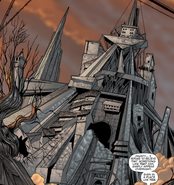 The Asylum in Deadside in the comics

The entire interior is full of burning coals and pipes with fire or steam spewing out of them. Some of the blood-filled hallways contain hordes of Hookman butchers, who are harvesting Deadsiders from the Wasteland. Also, this location is heavily guarded by Sniper Guard Hookmen and most of the doors are locked including the front door. Shadow Man must find the Engineer's Key to unlock all of the doors found in all the Asylum sections.