Surgeons are a type of enemy in Shadow Man, encountered in various Asylum levels, such as the Experimentation Rooms, Playrooms and Engine Block.

They wear white hoods with a black void 'face' with red clothing and harnesses. Their primary weapon is some form of machine gun that burst fires projectiles with deadly accuracy and range, as well as a baton with a circular saw blade attached to it (shown in photo) that the surgeon will hit Shadow Man with only if he gets too close to him. Surgeons also are the only Asylum resident that can somewhat talk saying what sounds like “Die!” , “Mommy!” , “Blood!”, "Hold Me" and “Pretty pretty” usually when killing Shadowman or when they are starting to die.

Surgeons can pose a moderate threat by themselves, however they are almost always found in groups of two or more, and the amount of firepower they can bring to bear on Shadow Man should not be underestimated. Because their primary weapon is very ranged & they will force you to dodge their projectiles or suffer significant damage.

Surgeons play what looks like a minor role in the game but they are more important than at first glance. If it wasn't for them Legion wouldn't have his army of the damned constructed (the Trueforms ) to bring apocalypse. 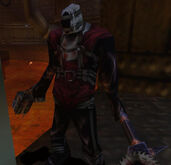 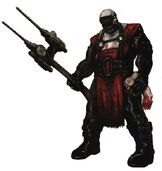 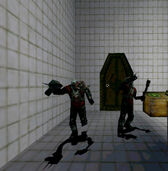 Surgeon swings his saw staff in the toy room

Community content is available under CC-BY-SA unless otherwise noted.