A weapon only usable in Liveside. One shotgun holds 50 rounds but when you have two, or rather a Sawed-off Shotgun in Remastered, you can hold 99 rounds. Possibly the most powerful Liveside only weapon against the Five and the inmate enemies.

The first shotgun can be found at the very beginning of the game, if you shoot the lock on the shed and drop down into the mine shaft. Swim through the water until you come to a cave, follow it until your outside again. Go to your right past all the alligators then into another shed-like building, where all the swimming gators are. This halfway submerged shed with a Govi in it holds the first shotgun.

The second shotgun is found later in the game on your journey through the Gardelle County Jail, when trying to find the Lizard King AKA Victor Batrachian. It's on an operating table in a hospital-type room filled with inmates.

In the Remastered version, a regular shotgun is found in the Gardelle County Jail rather than Bayou Paradis, Louisiana. 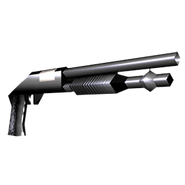