Single-player
Shadow Man Remastered is a remake of the Shadow Man video game released in 1999 currently in development by Nightdive Studios, who re-released the game in 2013. This time, the remake includes 4K resolution, improved shadow mapping, per-pixel lighting, anti-aliasing, and missing content that was cut from the original game. The game was released on Microsoft Windows on April 15, 2021. The console ports are schedule to release later in the year.

Changes from the original game.[] 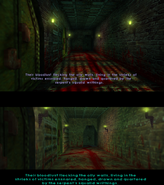 Shadow Man fights Yort in the Temple of Life