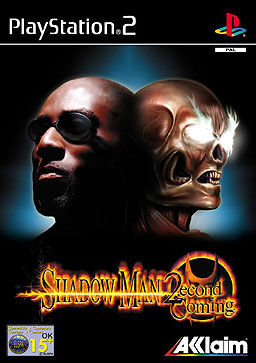 Shadow Man: 2econd Coming is an action-adventure video game developed by Acclaim Studios Teesside and published by Acclaim Entertainment. It was released in 2002 for the PlayStation 2 and is loosely based on the Shadowman comic book series published by Valiant Comics. It is a sequel to 1999 video game Shadow Man.

Like the first Shadow Man title and the comic both are based on, the game features a dark and mystical atmosphere that also has a distinctly Cajun feel to it. In addition to the storyline being set largely in or around New Orleans, the game is filled with themes of death, voodoo, Creole characters and names, as well as elements of African spirituality. The game follows protagonist Mike LeRoi in his quest to protect the living from otherworldly forces as part of his responsibility as the Shadow Man—which he became after being given (by the voodoo priestess, Mama Nettie) an ancient artifact called the Mask of Shadows, which gives the wearer the ability to traverse the worlds of the living and the dead.

The game starts off as a New York cop and his partner fight a huge demonic creature in an abandoned building. Their goal is to steal an enormous ancient book because it couldn't be put in the wrong hands, in this case the demons hands. The cop successfully grabs it and escapes the building but his partner gets shredded into pieces by the demons claws.

Some ten years later a near empty passenger train is headed to New Orleans. Mostly alone sits Michael LeRoi waiting for night to fall when he shall turn into The Shadowman. Nettie was waiting for him at her church but she felt something wrong. She looked at the sky and saw a blazing star and knew it meant trouble. Simultaneously in a run down N.Y. tenement building a legless wheelchair man with the face a mass of scar tissue rolled over to the window and noticed the gigantic star. Michael had already looked out the dusty train window and noticed the unfamiliar sky. He had to ask Nettie cause the whole world might be in trouble.

Wasting no time upon his arrival in New Orleans he ran to the Wild at Heart bar who was ran by Jaunty, the closest thing Michael/Shadow Man had to a “friend”. The bar was deserted and dead quiet which was severely out of place. He couldn't find Jaunty but once he went into the upstairs loft he found everything ransacked and bloody arcane symbols drawn on the walls. Mike knew it was some sort of gang but he didn’t recognize it.

After meeting up with Nettie in the church they both plan to search the Louisiana swamp land for Jaunty. LeRoi still needed to find his gun and his dads pocket watch but Jaunty was first priority. The mysterious gang had kidnapped Jaunty and hung him in a tree with the same arcane symbols from the bar but this time they were on his head. Unfortunately, after LeRoi finds and returns Jaunty to Mama Nettie, he is cursed with a powerful spell. Upon completion of his second task and after another visit with Mama Nettie, LeRoi receives a note from a man named Thomas Deacon whom he goes about in search of. After which LeRoi learns of "The Codex"  book, Asmodeus and the Grigori, as well as their plan to cause Armageddon It is once again up to Mike LeRoi, or Shadow Man, to save the world.