Shadow Man is armed with the Shadow Gun, the Deadside representation of Mike's handgun. Although similar in appearance, its difference lies in the fact that Shadow Man has the power to channel the power of his Mask through it. Rather than firing normal bullets, the Shadowgun literally focuses the power of Death itself from the Mask and unleashes spectacular destruction in the form of shrieking wraiths, ripping through its victims before leaving their souls behind. The Shadowgun does not use any bullets because of it being channeled through the Mask. The more Dark Souls The Shadow Man obtains the stronger his life force meter becomes, which also makes the Shadowgun stronger. Most of the standard enemies in the game die in two fully charged (120 Dark Souls) gun shots. 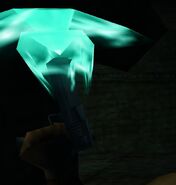 Shadowgun charged up
Community content is available under CC-BY-SA unless otherwise noted.
Advertisement