Retractors are three items found in the Asylum Playrooms, Cageways, and Lavaducts where they are held in shrines heavily guarded by the sniper guard hookmen. Inside each of these shrines, there is a human-shaped statue on an altar with the retractor sitting where the statues ribs would be, which hints to its usage.

Their purpose is to open the way through the three schisms in the Cathedral of Pain that didn't have a retractor already placed on them; leading to Avery Marx, Victor Batrachian, and Jack the Ripper.

Shadow Man needs to find each specific corpse while holding the Retractor and press the action button to mount it, then the action button again to pass through the corpse into Liveside. Although you can pass through the corpses and come out on the other side as Mike LeRoi you still can't defeat the five without the Shadow Gun. Shadow Man will also have to acquire all three pieces of L'Eclipser to bring the night into Lifeside and defeat all of the five. 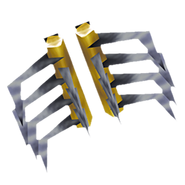