“What further horrors shall I find within this terrible place?

Wherein a time before these catastrophic events, I would have willingly accepted pallid imitations of such horrors.

I now have come so far my sensibilities lie benumbed by all I see.

I do not embrace this horror, but rather stand immobile beneath its self-indulgent gaze.

Confusion reigns and I fear the God within the machine is no longer there.”

-Shadow Man, at the entrance to the Playrooms

The Playrooms are an area located within the Asylum in the video game Shadow Man.

This area consists of blood flowing through pipes, cell-like blood stained operating table rooms, Dark Soul machines instead ofGovi's & an even darker atmosphere than other parts of the Asylum. All the Asylum enemies in the Playrooms are in some sort of permanent state of suffering and most of the new enemies can be found here. Shadow Man will first come across the Dogman which looks like a humanoid person walking on all fours wearing a blue latex suit which growls and whimpers. In addition, the place is littered with Surgeons as this is their primary purpose to butcher & sew up the harvested flesh in their operating table rooms. There is an area where the first Trueform encountered in the game will be released out of its cell box but is still trapped within a cage until it can be reached later in the game upon finding the Marcher Gads. The Trueform will scream and run around but it's harmless... for now. The Playrooms gets its name from the Playrooms found later on in the level. Rooms with white tile floors, walls, and celings that all seem to serve unknown purposes or obvious torture. One room contains severed goat heads smeared across the walls in a symmetrical pattern & in blood writes “Analyze this”. Another noticeable playroom is one that is a brightly colored children's room with large 'ABC' blocks and a Hookman in a playpen. The sheer insanity of Legion and Jack the Ripper's madness is limitless within this part of the Asylum. Shadow Man has only begun his journey taking in what “...lies benumbed by all I see...” . 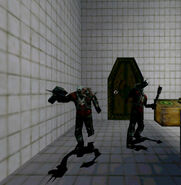 2 surgeons in a cell

Surgeon in an operating room

in the glass blood pipe

Dogman creatures in a cell