A gun found in the Gardelle County Jail level in Liveside . Not much difference than the 0.9 SMG gun in the game other than it also shares the same bullets & can hold 400. Can only be used in Liveside levels (Gardelle Jail, Mordant St. and Down Street Station ) whether the player plays as Shadowman or Mike .

*The MP-909 seems to be based on a H&K MP5SD. it would make sense seeing as how the sound is rather softer (compared to the Shotgun and Handgun) and is most likely chambered in 9mm cartridges. 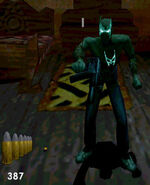 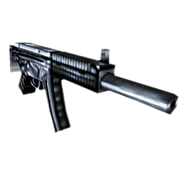