This was Michael LeRoi's last possession left by his little brother, Luke, after he died in a drive by shooting caused by Mike taking the $20,000 left in the cab that was "hot money" wanted by some gangbangers. When Mike touches previous possessions such as the teddy bear, he has flash backs and can even hear them talking which torments him even more. Mama Nettie put a spell on the bear to react when Mike touches it, so he can travel back and forth through the veil from Liveside to Deadside, which is aided by the Mask of Shadows. Only Michael can use the bear to travel because Nettie's voodoo powers con't allow her to or she might die because she doesn't have a Mask of Shadows of her own. Neither can Jaunty, because he is only Nettie's eyes & ears in Deadside and has no physical Liveside body remaining. 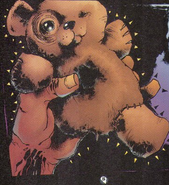