Edit
watch 01:36
We're Getting Mutants in the MCU - The Loop
Do you like this video?
Play Sound

John G. Pierce/Jack The Ripper: Another member of "The Five", John Pierce is a fictional character in the game based on the infamous real life serial killer of the Victorian era known only as Jack the Ripper. The game starts with a cutscene in 1888 (the year of the "Ripper" murders), at a sewer beneath London where Legion appears before John (who is an architect by trade) and convinces him to commit suicide so as to cross over to Deadside and design Legion's "Asylum", a place for all the "misunderstood individuals of this world" (serial killers, rapists, pedophiles etc.) to seek refuge. There he stays until 1999, when he returns to Liveside and begins killing again, using the abandoned Down St. Station of the London Underground as his hideout. On the morning following the first murder, this poem was discovered written on a wall near Shoreditch Station:

The Watchers of the Gate of Souls shall make the way,

The Five are red in teeth and claw,

The head, the heart, the hands, and the eyes,

All combine and create the Five.

Discovered in white chalk the morning following the last victim: 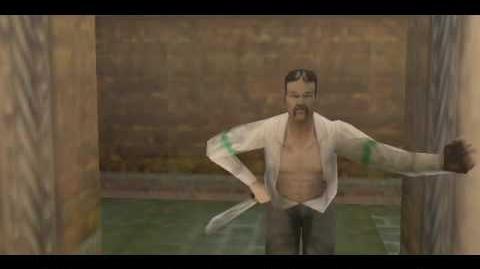 The knife shall curve its bloody ritual,

A sanginuary return to a darker place,

The weeping wound and its glowing soul,

Jack the Ripper in the comic-books