The jail is a fictional place in Shadow Man that can only reached by passing through the schisms at the Cathedral of Pain. The only serial killers of "The Five" that were "captured" are Marco Cruz, Milton Pike, and Victor Batrachian. They can all be found inside the prison. The entire jail is a maze with blocked passages by gates that need to be opened from different parts of the level depending on which schism you went through first. Marco and Milton's schisms already have retractors on them, but Shadowman/Mike can't get very far in these areas because almost everything is blocked off. He needs to find the Prison key card to open all of the gates. The entire level is surrounded by the bloody headless corpses of the inmates. If Shadowman/Mike walks past them, sometimes they will stand up, their heads will explode, and start shooting/swinging clubs mercilessly.

Gardelle County Jail has several rooms and hallways leading into different sections leading upstairs or down. A lot of the jail is ransacked in some way with large accessible holes in the ceiling or walls, blood everywhere, and most of the equipment destroyed. Inside the jail there is a chapel, basket ball court/weight room, pool table/ping pong room, bathrooms, kitchen, morgue with operating tables, and a few outside areas with security guard posts. The room right after passing through Batrachian's schism has a lot of his paintings in it as well. There isn't any police backup coming in, but alarms and police sirens can be heard throughout the facility. There is a helicopter in one of the courtyards that will say “Stop where you are!”, befrore repeatedly flying around and opening fire until its destroyed. 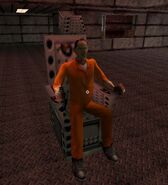 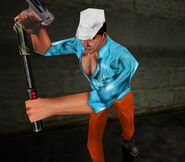 Cop in the kitchen room

"This is the end, beautiful friend!"