None
In the video game Shadow Man, the Engine Block is the most vital area in the Asylum located in Deadside. Here, 4 giant stabilizing pistons (6 in Shadow Man Remastered) make up the Asylum's Great Dark Engine, powering all mechanisms within it. Having been terrified by the amount of power harnessed by the Dark Engine, John Pierce / Jack the Ripper had built a failsafe mechanism into the design, with pistons to counteract any destructive surges that could occur. Each piston can be deactivated with the use of an Engineer's Key at an operating console by entering a correct combination for each, which can be found in Jack's Journal.

In the present, Shadow Man makes his way to the Dark Engine after learning from Marco Cruz, a member of The Five, that his little brother Luke was located near there. He does see him, but is unable to reach him at first as the giant pistons were currenly active. Therefore, he is forced to travel to each Liveside location via the Cathedral of Pain to defeat the Five, later gaining access to the Prism Gates after activating them with a Prism which leads him to a different area of the Engine Block, depending on what gate he went through. From there, he would have to find each console to deactivate the pistons, though the first console was already available for access near the Dark Engine's entrance.

WIth all 4 (6) pistons deactivated, Shadow Man is able to reach Luke, who turned out to be Legion instead, posing as his little brother to ensure he got there. Eventually the area was destroyed along with the rest of the Asylum upon Legion's defeat at the hands of Shadow Man. 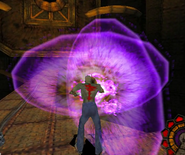 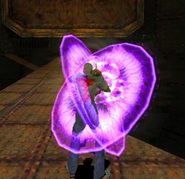