The Deadsiders are the primary inhabitants of Deadside and are rumored to live there in extremely large numbers, as Deadside is the place where everyone goes without exception when they die.

Deadsiders resemble normal humanoid beings, being male and female, which appear nude with white skin and intestines exposed. They can be heard moaning all throughout Deadside while in their state of constant suffering. When found they usually dwell in the Paths of Shadow or near bloodfalls curled up in the fetal position.

If a Deadsider notice Shadow Man, they will stand up and try to steal his life force by sucking it out of his body, but other than that they're harmless. When Shadow Man kills them with his Shadow Gun, their life force is left behind which he may consume, whether or not this sends them to a better place free of suffering is unknown.

Some of the Deadsiders were collected by the Hookmen and shipped through the Asylum Cageways in containers to be harvested. Since they're in the thousands, there will always be meat to be taken. The Deadsiders are then tortured and slaughtered by the Hookmen before being shipped in meat boxes to the Surgeons in the Asylum Playrooms, where they will be re-patched together to create giant Frankenstein-like creatures called Trueforms to wreak havoc upon Liveside and destroy the earth. 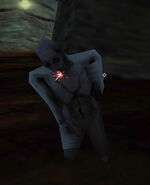 Deadsiders in Playrooms cages to be butchered

Deadsiders are notably more dangerous and aggressive in the comics
Community content is available under CC-BY-SA unless otherwise noted.
Advertisement