The Cadeaux (French for "gifts") are items that appear in the game Shadow Man and its sequel, Shadow Man: 2econd Coming.

Cadeaux are small ceremonial pots that can be used to increase Shadow Man's Shadow Display meter by one unit. They are offerings to the Loa for a "Spiritual trade for life beyond" as said by Shadow Man. In both games, he will start off with 5 units for the meter and can be eventually increased to 10. In the game Shadow Man, there are 500 pots to collect. As Shadow Man, Michael must bring them to the Temple of Life in the Wastelands of Deadside before 5 shrines each taking 100 each. A shrine that has already been offered a set amount will show 1 pot on top of it.

In 2econd Coming, the cadeaux are offered to 2 shrines located under the Homfront church in Louisiana. In addition to offering health, they will increase Micheal/Shadow Man's voodoo powers as well (replacing the Dark Soul method from the previous game). Rather than offering 100 at a time, it's cut to 10 for each offering increasing voodoo power and health meters by one unit depending on which shrine the offer is being made to (red glow for health, yellow glow for voodoo powers). After offering the cadeaux to each shrine 5 times each, they will become inactive.

In Shadow Man Remastered, there are 666 to collect in the game. Doing this will unlock an achievement called Cadeaux Collector. As of Version 1.4 update all 666 Cadeaux are needed for a door behind a new level 10 coffin gate in the Fogometers. 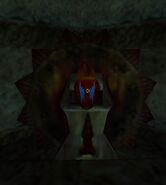