Teddy Bear warp to the Playrooms and go down the glass hallway and turn right the door at the end of the hallway on your left should lead to a large room with Surgeons shooting you from above. The room in the far left corner with a glass window and white tiles contains a few Surgeons, a dead True Form (PC, Dreamcast), a loose Dark Soul, and the three containers with the Violator plus ammo.

Where to find all the Accumulators[]

Five accumulators are to be found in the game (every version). Not all of them can be obtained right off the bat. Shadow Man will need high level of voodoo power and may even need some of the voodoo weapons acquired later in the game such as the Calabash:

1. Gardelle County Jail - after confronting Milton in a cell with a rusty door near the blue striped walls. Shoot the lock off the door and enter to grab it.

2. Gardelle County Jail- also after confronting Milton it is located in the Chapel near the green striped walls.

3. Gardelle County Jail- warp through Batrachian 's schism in the Cathedral of Pain and you will find several of his paintings along with the blaring police sirens in the background. The painting that shows the blocky stair like Asylum drawing with an eye in the middle shoot it and go through the path. You will need the Calabash to break the tile to jump in the hole to grab the Accumulator.

4. Down St. Station - Easy to come across without looking for it cause it's in the main path. After shimmying across the dangerous ledge with Zombie Dogs below go down the corridor and you will go down a few ledges. Shoot the wooden beams then enter the elevator. Enter the hallway on your right with the bricks and hit the switch then go back and go across that new bridge. Head through all the gory carpeted rooms and you'll run across it.

5. Mordant St.- Use the elevator to go to the third floor. Go right of the elevator, jump the hole and go through the door. Make a left jump over the discolored boards (you'll get a secret here too). Turn around and find the room with a hole in the floor then a corridor with wooden slats and no wallpaper on the walls. Jump over the hole and walk down the long corridor (shoot all the crates) and after going through several rooms (the only ways you can go) you'll find the Accumulator. 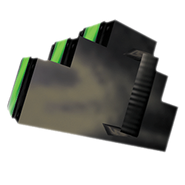